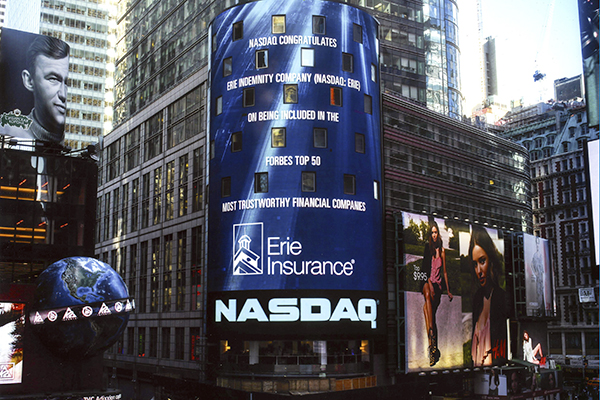 Recently, the following was published by Erie Insurance Group.  We are extremely proud of the company we have represented for over 30 years!

ERIE recently lit up Times Square with the news of being named one of America’s 50 Most Trustworthy Financial Companies. According to a recent study by GMI Ratings, Erie Indemnity came in with a “best score” in the mid cap segment with an average Accounting and Governance Risk (AGR) of 99.

“It’s a great honor to be among companies of this caliber,” said Brad Postema, senior vice president and chief investments officer. “This type of recognition affirms our efforts to live by ERIE’s values, to operate under the highest ethical standards – it’s a great complement to the third-party recognition ERIE receives for service.”

GMI, a proprietary ratings provider and investment advisor, studied the accounting and governance behaviors of more than 8,000 publicly traded banking services and insurance companies from fourth quarter of 2012 through third quarter of 2013. For each company, GMI identified an “Aggressive Accounting and Governance Risk,” or AGR rating. Companies making the top 50 rankings have the highest AGR ratings for the time period studied.

The list of America’s 50 Most Trustworthy Financial Companies was released earlier this month by Forbes.